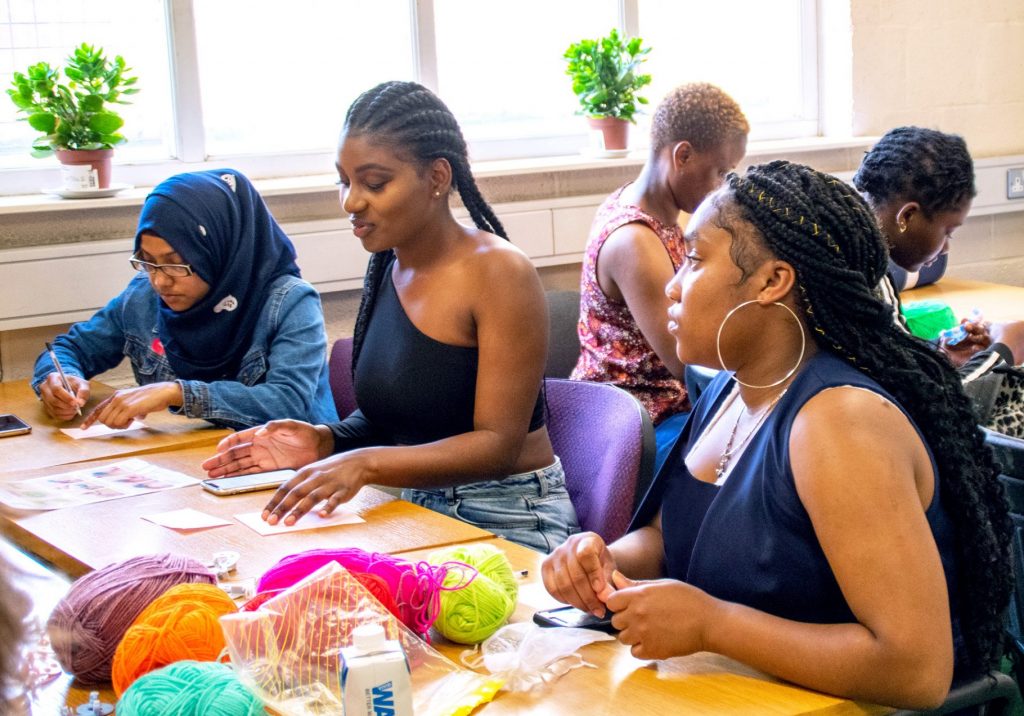 Young women have an important role to play in the creation of a fairer and more just society. This is why Red:GLOW exists.

Young women are doing well at school. In fact, most of the time they are beating their male age mates in exam results. Throughout their time at school and university, young women do a lot of volunteering. They give themselves to their communities and good causes.

They are gaining transferable skills, connections and real experience, but often don’t have the support to reflect on this. On their CVs they write that they have experience looking after children or planting trees, but not managing budgets, planning projects or undertaking stakeholder engagement. In interviews with employers they talk about their passion but not their skills. Young women talk themselves out of roles despite their achievements.

By the time young women leave university young men are, on average, doing better. From there on, most young men with the same results will do better in their career, in prestigious appointments and in leadership positions within their community. Why is this? Is it because women have children? Perhaps. But long before they take time out for maternity leave, young women are losing out.

Part of the set back for young women is confidence.

So many women have what we call ‘imposter syndrome’. Despite evidence to the contrary, they feel incompetent in their jobs and are reluctant to seek promotion or further responsibility. In part, this is a result of a system that is geared against the way many women think and act. Workplace cultures are often set up to reward individual ambition and competition: traditionally male traits. Women often thrive in collaborative environments, where they can foster each other’s talents and play to their strengths for a better outcome for the organisation.

Women often invest in mission and relationships in the workplace, rather than simply promotion or a pay rise. This means that they can be overlooked when a promotion is up for grabs. Many women are not asking for pay rises and promotions, because many women don’t think they deserve them. Most women do not apply for positions unless they feel that they can already do the job perfectly, and male bosses see this as a sign of incompetence. As women, we do not blow our own horns, or claim a team success as our own, so we get overlooked.

We also get overlooked because we are not forming the right relationships. Women are still excluded from the male social spaces, the sports talk and the after-work drinks, that lead to connection with superiors and informal mentoring that lead to networking and advancement. As we get older and start a family, men still see this as an important part of their work, and women see it as something that is less important than getting home to their children.

What consequences does this have outside of work?

With women’s lack of confidence and slow progression up the rungs, they do not have the same claims to prestige as citizens. Women are not often the people who people seek out to join boards or stand as political candidates. We do not have the connections that recommend us for these roles, so, these roles go to other people, usually men. Women’s voices and experiences are lost in the process.

This also plays back into the workplace. Often, women do not have connections that recommend they apply for a job somewhere they never had considered. Women are not gaining the skills through roles that allow them to get promotions and greater success in their professional work.

Support from a good mentor, teacher, or youth worker can help us to overcome these things. To reflect on what we learn in the workplace, at school and in the community, so that we can overcome our fears, negotiate systems and cultures and make the most of our talents and capacities.

Young women have an important role to play in the creation of a fairer and more just society– good working conditions, a welcoming society and more equitable structures. This is why Red:GLOW exists. To give young women an opportunity to reflect on the transferable skills they learn through volunteering, to boost their confidence and to help them build leadership skills with youth workers.

Learn more about project Red:GLOW on this link.