Home » The FATIMA Project: a year in review

The FATIMA Project: a year in review 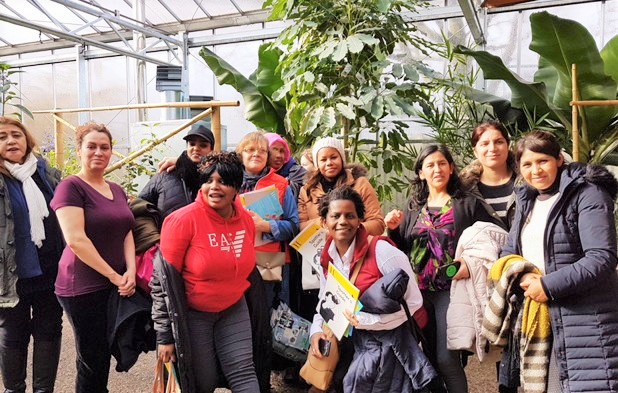 Now that the first year of FATIMA has drawn to a close, we’d like to take a moment to reflect on everything we’ve achieved so far.

We’ve exceeded all of our targets and we have now begun evaluating our progress and sharing our work with policymakers, academics, students and the general public. The FATIMA project was designed with the purpose of supporting the economic, social-cultural and political integration of 210 female Third-Country Nationals (non-European citizens), with a particular focus on language learning. Each woman enrolled is receiving one-to-one support through language classes, mentoring, personalised development programmes, civic engagement and cultural activities, as well as volunteering and work experience.

There have been numerous challenges to the programme’s implementation, but we are immensely proud of how our project partners have taken a flexible approach and succeeded in achieving all of our goals. Here is a snapshot of the project so far:

140 women have been enrolled in the language learning programme, meeting 66% of the two-year target.

All project partners had initiated their language learning activities by April 2018, and beneficiaries attend weekly classes which implement a wide range of interactive learning techniques. At Baytree several beneficiaries have attempted and passed the Accredited Pearson Edexcel exam for ESOL, whilst many other learners have received their language diplomas.

The average age of the women helped in the project is 36.

Many are mothers and hold other responsibilities, which can make regular attendance to classes and activities difficult. The project partners have responded with remarkable flexibility to these challenges, recognising the diverse needs of the individual women. Senara has successfully reached out to the Chinese community in Madrid by welcoming Chinese children into the schools, and other partners fit classes around responsibilities such as picking up children from school.

Baytree welcomes women from eighteen different nationalities, with Ecuador and Eritrea being the most well represented with 6 students each. The majority of women at Panorama come from Ukraine, with other former Soviet Union countries also represented. At Sursum almost all of the women come from Latin American countries including Venezuela, Chile and Columbia. Senara is host to mostly women from China, but also a number of other nationalities are represented including Kenya and Pakistan.

78 mentors have been enrolled

Mentor pairs have been established based on shared background and interests, and relationships of trust and mutual respect have developed between volunteer mentors and beneficiaries due to the reliability and continuity of the pairings.

These include talks on health and education systems, social service access, financial management and careers advice, as well as wellbeing sessions such as yoga and ‘laughter therapy’. There is also a focus on learning local culture and customs, including visits to key cultural sites and sampling the local cuisine. Panorama in Poland, for example, has held a series of events entitled “A Cup of Culture” dedicated to significant figures of Polish history.

In a review performed by Baytree:

The success of the project so far has motivated our partners to enter the second phase of the project with great enthusiasm; Panorama in Poland even started recruiting for 2019 early because there was so much interest and demand for the programme. We’d like to thank everyone involved for their support so far and look forward to updating you with more of our progress and achievements over the coming year.