Home » The FATIMA project in action

The FATIMA project in action 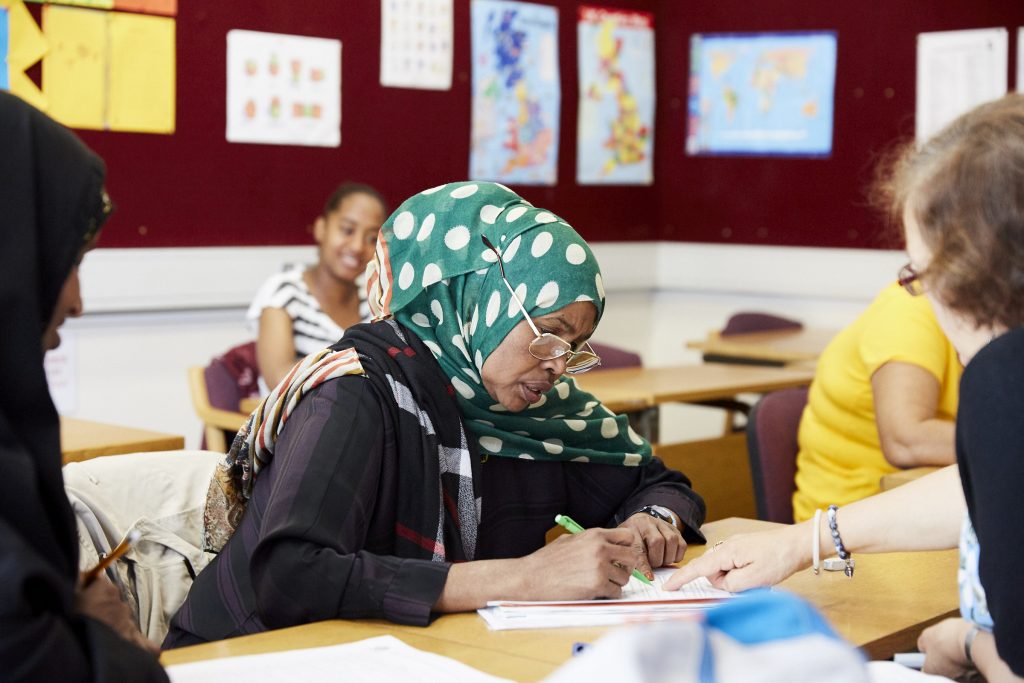 A visit to the Baytree Centre, to see the FATIMA project in action.

I am a volunteer at WONDER Foundation. I had the pleasure of making a trip to the Baytree Centre in Brixton, London to sit in on a beginners’ ESOL class and see the FATIMA project in action. The class was part of the EU-funded FATIMA project, an innovative, collaborative venture that aims to empower and integrate migrant women through a personalised, holistic approach.​

FATIMA’s vision, which is based on extensive research, sees language learning as something far more than sitting at a desk, cracking open a textbook, and memorising vocabulary words. It recognises the importance of having a safe, welcoming space to learn; of having individualised attention; of having friends in the class for support; and of learning material directly relevant to daily life. For migrants, facility in the local language can mean the difference between being employed or not, being able to book a doctor’s appointment or not, and being able to enrol your child in football practice or not. When it comes to language learning, it’s important to do it right.

A sense of community

As soon as I walked into Baytree, it was clear how much of a community space it was. The walls were adorned with murals, art, and photography made by its members; the ESOL classroom featured dozens of photographs of current and former students on its walls.  Due to a last-minute change in circumstances, I was an unexpected intrusion in the class but was warmly welcomed anyway by the teacher, Bouchra, who had once been an ESOL student at Baytree herself.

Going beyond the textbook

The class was small – only seven students – and we all sat facing each other, in a U-shape. This was ideal: as I came to realise, the classroom setting was not just about reading or writing or even listening and speaking, it was about conversing: asking your classmate if they ate crisps, or if they take sugar with their coffee. No? Then what about milk? It was about the interactions that make up daily life: listening to others, responding appropriately, listening again.

The small class size meant that there was time for everyone to have their moment in the spotlight, to speak aloud in front of everyone else. Bouchra had unrelentingly high standards, repeatedly correcting pronunciation firmly yet kindly. “It’s ninety; otherwise people could think you were saying nineteen, one-nine. Nine-zero is ninety. Say it again! Ninety. Ninety. Good!”

I thought about how my professors at university were much less demanding, willing to let things slip when I nervously rambled near-incoherently or misspoke a fact during the seminar.  It had seemed a kindness on their part at the time – an unwillingness to correct me publicly to save me from embarrassment in front of my peers. But embarrassment wasn’t an issue here. No one was judgmental. Everyone was new to English. Everyone was here to learn. And of course, everyone made mistakes. If you didn’t get corrected, how would you improve?

The feeling that this class was very much a group effort was reinforced by the fact that Bouchra was clearly very familiar with each student’s abilities, and knew that at times, they were more than capable of figuring things out for themselves. During a lesson on verbs, the women breezed through “read”, “circle”, and “write”, but struggled with “underline”, which they had never seen before. Bouchra gave them some hints. “Under.” She mimicked crawling under a desk. “Line.” She drew a line in the air. “Under-line. Underline.” Everyone soon figured it out.

Despite moments like these, where, thankfully, words make sense and everything comes together, I was reminded of how hard it is to learn a new language. English, as a language, is notoriously nonsensical, full of quirks and irregularities. (That nineteen is so close to ninety is – let’s face it – a bit annoying and certainly not well thought out.) What’s more, it uses a completely different alphabet to the languages that some of the women were native speakers of, including Thai and Bengali.

Gaining fluency requires a significant time commitment, which the women had to balance with work and childcare commitments. The class met four days a week for a total of ten hours, and the work doesn’t end there. Homework had been assigned and had been brought in completed.  While I didn’t bear witness to the work and effort put in outside the classroom, I could imagine it: my mother moved halfway across the world at 32 and balanced her ESOL classes with raising two young children. I remember being five or six, watching her rifle through a pocket translation dictionary in the evenings, filling up pages with vocabulary words, putting those pages up on the refrigerator.

The provision of flexible, free English classes where students are welcomed, supported, and respected is incredibly important – and, as I witnessed, makes for excellent, effective learning. It couldn’t be more clear that its provision – through programmes like the FATIMA project and charities like Baytree – is something to be funded, encouraged, and otherwise supported. Without it, migrant women may not have the opportunity to achieve the personal, professional, and family goals that they deserve to see fulfilled.

More information about the FATIMA project and how you can take action to support the project can be found here.