Home » A conversation with Olga

A conversation with Olga 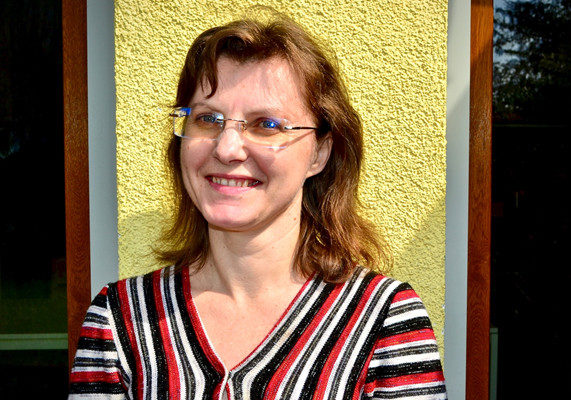 When Olga found the FATIMA Project in Poland, she started to “feel human again”.

Olga left Ukraine two and a half years ago to Poland. Olga is 43 years old and is a mother of four children – with one girl and three boys – and their ages range from 5 to 18 years. Olga studied German and English and has a professional qualification in foreign language teaching in Ukraine. Apart from a brief translator job that she held to help American families with adoption in Ukraine, she never managed to find professional work that matched her qualifications.

The situation in Ukraine was so desperate that even the translator job that assisted foreigners with child adoption became increasing doubtful and sceptical. Olga learned later that there were rumours that the company’s adoption scheme was only a facade for illegal organs trading. Although Olga could not verify the legitimacy of such claim, she could not bear the weight of the risk and be involved in any way to such crime, so she made a conscious decision to walk away from the few jobs that aligned with her career aspiration. Her husband worked in the construction industry specialising in interior design. Despite his efforts to securing a permanent position, most of his contracts were temporary, and Olga had to work in various jobs as shopkeeper and babysitter to meet the family’s needs.

For Olga, the last straw that broke the camel’s back was when the family’s entire savings went missing at the bank. Olga tried everything to reclaim their savings, but it was impossible legally to pursue the bank. This bank is still operating, and the loss of her money is not due to a bankruptcy, but because of the fraudulent system. The hardest thing for Olga was the fact that after many years of efforts and hardship to build a better life for her family was stripped away overnight without any protection nor representation to fight against this theft and injustice committed by a reputable bank. Olga had lost hope in her country.

Olga and her husband decided to leave Ukraine and start anew in Poland. They first came to Wroclaw in late 2016 on a temporary (six-month) visa to prepare the paperwork and to arrange for their children to join. There were many bureaucratic both formal and informal processes to go through – completing documents and paying for legal advice to increase the chance of application acceptance. Olga and her husband have done all they could in every possible way for their application to proceed smoothly, but they were in shock when they found out that Olga’s husband’s application got lost in the immigration process system, and he faced immediate deportation. Olga had to pay extra fees for legal assistance to challenge against the deportation appeal and had it revoked because the missing documents were not hers but the Immigration Office’s fault. By revoking the order, her husband’s legal status was clean in the record, but still, her husband had to return to Ukraine for three months, leaving Olga by herself in Wroclaw, because his temporary visa was coming to an end.

Such unforeseen mistakes are not frequent, but not unheard of amongst Ukranian migrants in Poland. A part of the inefficiency problem in the immigration system is due to the increasing pressure in the past six years from the overwhelming influx of migrants who are seeking residency in Poland (partly in line with the Crimea crisis in 2014). Only recently, after two years of waiting, Olga and her husband received permanent residency, and all her children have joined them in Wroclaw.

When she first arrived in Poland, only Polish words that Olga could say were ‘tak’ (yes) and ‘nie’ (no). Olga believed that her extensive foreign language skills would help her in learning Polish, but she felt that all her previous experience was useless. She mostly learned Polish informally at work from her fellow Ukrainian factory workers in the beginning, but she realised that she needed to learn the language more seriously.

Olga first heard about the Fatima project and language programme at Panorama through her daughter’s friend who was at the time a Fatima project participant in 2018. This opportunity seemed the most suitable for her work and family schedule. Olga used to work two jobs: an eight-hour factory job and a four-hour cleaning shift for five-days a week. The Fatima project offered intensive language courses on the weekend (Saturday and Sunday), which were the only days Olga could manage to come. Even if attending the course means less time with her children and for much-needed rest, Olga is convinced that more and faster she learns the (native) language well, better her work and family’s life opportunities will be. Olga gave a concrete example of this point. In her current work at the embroidery company, she was recently promoted because of not only her hard work but because of her effective communication with her team and management. When Olga heard the promotion news, she was moved beyond joy and felt a ray of hope breaking through the negative experiences of years of misfortune and tragedies in her life, which have dulled her sense of her self-worth and esteem. In her own words, Olga realised that “I felt human again”.

When asked if she had visited or kept strong ties back in Ukraine, Olga fell silent for a moment and explained that while she was waiting for the immigration decision, she was not allowed to travel outside the country. Although she can travel freely to Ukraine with her full and secured residency, Olga feels reluctant to visit Ukraine. She visited her parents and family as soon as her travel restriction was lifted, but when she went back, she was immediately reminded of the many troubles and problems of the past that caused her much grief and hardship. Moreover, the struggles and difficulties of everyday life back home for simple things like food and fuel for heating and transportation felt sharply in contrast to her new life in Poland. For the time being, Olga does not want to return and visit back often because of the traumatic memories that are still too fresh for her to let go.

Although Olga and her family are physically settled and stable now, Olga often feels tired from all the troubles that she endured in the past years and want to find rest both physically and emotionally. Olga’s radiating smile seemed to betray all the things she said, but she explained that “[because now] progress is possible” and “positive things are happening” in her life such as the work promotion that she mentioned earlier. Despite the hard work and steep learning journey that are ahead of her, Olga is not afraid of the challenges and seeks to improve because “I have not yet found my [true] self”.

When asked about the reason that made her want to share her story with us, Olga explains that she would like to show other people in similar situation that initial difficulties, even if at first they seem impossible to solve, can eventually be overcome and that you should never lose hope, because with time and effort things will change for better.